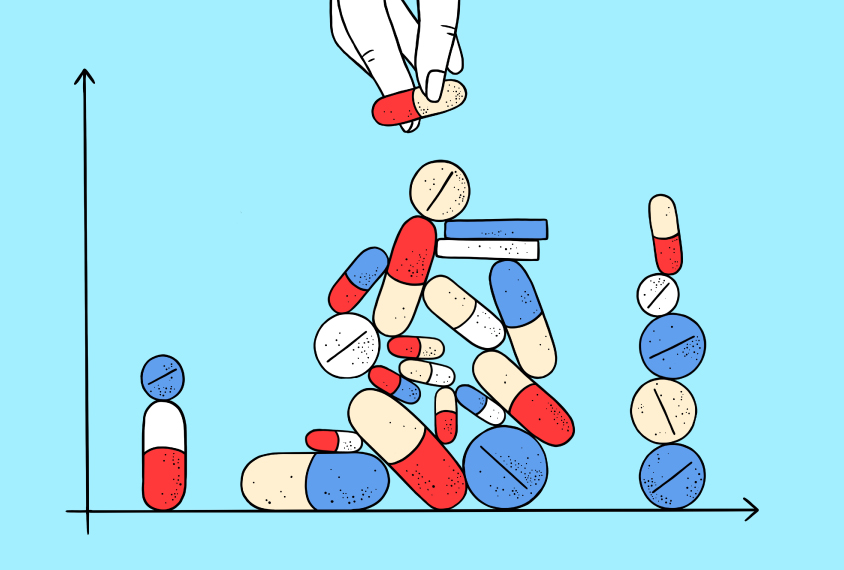 Welcome to the first edition of Going on Trial, a monthly newsletter rounding up the latest developments in autism-related drug trials. In this issue, we recap new developments about arbaclofen, an experimental cell implant therapy, psilocybin, ketamine and oxytocin.

This newsletter is in its safety and dose-finding phase, so email me at [email protected] with your tips, questions or feedback on how to improve it. And don’t forget to subscribe to receive this newsletter in your inbox every month.

Almost half of 38 children with fragile X syndrome who took a high dose of the drug arbaclofen showed clinically meaningful improvements in irritability, social avoidance and social responsiveness, compared with 4 percent of the 44 who got a placebo. The results, presented last year by Allos Pharma at the National Fragile X Foundation International Fragile X Conference in San Diego, California, yielded a p-value of 0.00003 (values of less than 0.001 are typically considered highly statistically significant).

The data came from a trial of 5- to 11-year-olds that wrapped up in 2013. The original results showed no significant benefit over placebo, but Allos re-analyzed the data after it licensed the rights to develop the drug for fragile X syndrome in 2020, Fragile X News Today reported last August. The researchers applied new thresholds for improvement to subscales of the Aberrant Behavior Checklist, which is filled out by parents and served as the trial’s outcome measure.

This re-analysis of the drug, which dampens inhibitory signaling via gamma-aminobutyric acid (GABA) receptors, is “very exciting,” says Joseph Piven, professor of psychiatry and pediatrics at the University of North Carolina at Chapel Hill, who was not involved in the study or the re-analysis. But the small number of participants means that the results require replication, he adds.

Placebo issues are also a concern, says Allan Reiss, professor of psychiatry and behavioral sciences at Stanford University in California, who was not involved in the original trial or the re-analysis.

“One of the big issues to consider in these studies is whether the active medication group was truly blinded, since arbaclofen is known to have adverse effects,” he says.  “On the other hand, it is possible that some of these effects” — mild sedation, for instance — “could have accounted for the ‘therapeutic response’ in a proportion of participants in the active arm.”

Having participants complete a learning test that assesses how much they improve in specific cognitive abilities could paint a clearer picture of the drug’s benefits, Reiss says. “I am cautious about clinical trial results that utilize drug versus placebo-only designs in children with long-standing neurodevelopmental problems like fragile X syndrome.”

Two people with drug-resistant epilepsy experienced significant relief from their seizures after doctors implanted a single dose of inhibitory neurons into the hyperexcitable parts of their brains, according to preliminary results presented at the American Epilepsy Society meeting in December. One of the trial participants went from having more than 30 seizures per month to just 4 seizures over three months after receiving the treatment, dubbed NRTX-1001 and created by Neurona Therapeutics in San Francisco, California. That participant has also experienced no serious adverse events, according to the December presentation. The other participant went from having 14 seizures per month to only 1 in the month following treatment.

“It’s exciting work to address an important problem,” says Paul Knoepfler, professor of cell biology and human anatomy at the University of California, Davis, who is not working on the ongoing trial. “Overall, the clinical work seems off to a good start.”

Long-term monitoring of the trial participants will be key to understanding how the treatment works — and to assessing possible safety issues, Knoepfler says. “For example, in some participants the new inhibitory neurons might exhibit unexpected activity. There’s also the possibility of transplanted cells proliferating or migrating to areas where you don’t want them.”

Another fascinating question, he adds, is how long the transplanted neurons remain effective.

And that’s it for our first edition of Going on Trial! Be sure to subscribe so you can receive this newsletter in your inbox every month.