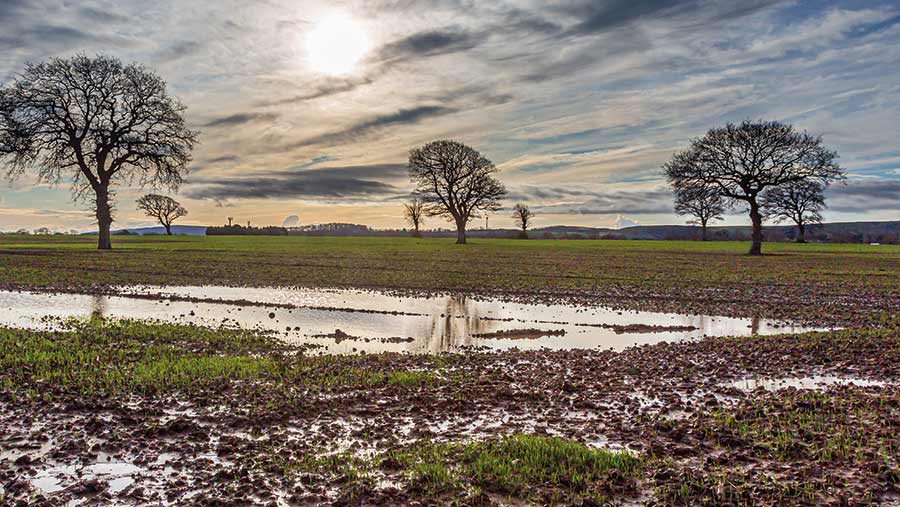 On paper, collecting rainwater would seem to make sense – water is essential for farming, can be scarce as last summer highlighted, and there’s a cost attached to taking it from mains supply, both financially and to the environment.

Dig a little deeper, though, and it becomes clear it’s not a straightforward decision for every farm, especially dairy and livestock.

Priority on the latter, currently, is more likely to be slurry storage, although rainwater harvesting might help reduce storage requirements.

See also: Analysis: What is being done to secure water resources for UK farmers?

The main use on arable farms is for spraying, while on livestock farms its drinking water for animals, as well as washing down and cleaning yards and equipment.

First steps to deciding whether to invest in rainwater harvesting are working out how much water is used and what for.

The Environment Agency’s Waterwise on the Farm provides a useful, if perhaps slightly out of date, guide.

Before embarking on a rainwater project, decide whether water use efficiency can be improved for no or low cost.

Next, calculate how much rain could be collected. This will depend on rainfall, roof area, the run-off coefficient and filter efficiency.

The run-off coefficient determines how much water will flow from the roof surface, and how much is lost.

A pitched roof typically has a coefficient of 0.85, meaning 85% of the water is collected, while a flat roof with a smooth surface is nearer 0.55.

Filters often reject the first flush of water to prevent debris entering the tank – most suppliers will provide filter efficiency, but a factor of 0.8 (80%) can be used if not available, although it might be on the low side.

This will help determine the size of system required.

Much less water is likely to be needed for arable farms than for livestock holdings – and especially dairy units.

In the calculated example (below), the amount of water collected using average annual rainfall in Cambridge would cover four spray passes across 400ha at 100 litres/ha.

However, the average annual rainfall in Carlisle would only last 13 days for a 200-cow dairy farm using 100 litres/day.

How to calculate potential collectable rainfall

With capital costs for rainwater harvesting increasing faster than the cost of water, the economics, particularly on livestock farms, need considering carefully.

This especially the case if the farm has already invested in a private source of water such as a borehole, says Neil Rowe, a livestock consultant with Rowe Associates.

Capital grants can help cover some costs but it’s important to factor in electricity requirements too, he adds.

“Don’t underestimate the costs of pressurising and pumping water around the farm from a rainwater tank if you’re buying electricity off the grid. It could easily make the project cost negative.

“The economic case is definitely less than it was five years ago, while the moral imperative has increased.”

The economic case is more challenging on a livestock farm, agrees Paul Bartholomew from Bart Agri, which designs and supplies livestock buildings.

He believes, however, that farmers shouldn’t overlook the economic impact of dirty rainwater run-off on slurry storage, and the potential positive public view of farmers using natural resources.

“You might be surprised how many litres rainwater adds to your slurry. By reducing that you’re increasing your storage capacity, which could have a big benefit,” he explains.

“With the changes requiring farmers to store slurry for longer, most are having to increase capacity on site, which is a massive investment.”

Using roof grants to cover yards and clamps and harvesting the rainwater from them will potentially reduce the investment required in slurry storage by diverting water away, he says.

There are also other ways to separate brown and fresh water.

On arable units, the payback is likely to be much quicker, says Dan Fentiman, from Norfolk-based supplier D&H Group, while siting systems is usually easier too.

“A restriction on livestock farms is often the gutter height on buildings are quite low, which means you can’t get a very big tank close by, and, typically, a livestock shed needs all-round access.

“Whereas a spray store is often on the end of a grain shed, where you have a large roof and 4.5m height to the gutter, so it is very easy to set up a system that will work very efficiently.”

“It is always worth filtering before water enters the tank to remove debris – it’s easier to keep a clean tank of water clean,” Mr Fentiman says.

“Our system has a three-stage filtration process, where you first remove the dirt and debris from the water. The water then flows into the bottom of the tank, which allows it to well up and reoxygenate the oldest water in the tank.

“We then have an overflow trap mechanism at the top of the tank which, rather than just overflowing, will suck and draw any dust and particles off the surface of the water.

“That leaves you with a very clean source of water, good enough to go into sprayer and not block any ball valves in livestock troughs.”

Once set up, rainwater harvesting systems will need looking after, says Mr Rowe.

Bacterial contamination can develop in collection tanks, while bird droppings washing in from roofs can also create issues.

Filtering water from the roof should help minimise issues, but, he says, many with systems don’t do enough quality control.

Such measures would include testing the tank and troughs fed with rainwater for disease-causing pathogens about three times a year.

He also suggests water should be extracted from the middle of a tank, as most pathogenic bacteria are likely to be either in the top 30cm or bottom 60cm of the tank.

“The perfect solution is a floating outlet pipe, so you are always drawing water from around a metre below the surface.”

Most systems have extraction points at the bottom, he says. That’s fine for spraying but increases risk when the water is being used for drinking.

“The ultimate safety feature is an ultraviolet light filter, but they are expensive to buy, run and maintain.”

Typically, UV filters are only used where the water is being used for more sensitive livestock, such as pigs and poultry, or sometimes on calving units with their more immature immune systems.

“I’d recommend you always keep the tank at least one-third full using a floating ball-valve to automatically top up with mains water, when necessary, from an inlet above the highest water level.”

That will mean there is an air-break between mains and harvested water, and avoid any risk of contaminating mains water supplies, as well as always using harvested water first when available.

Switching between sources manually is also possible, but risks leaving animals without water for a period of time or forgetting to switch back.

This can be set to alert you by phone to potential leaks or blockages when the flow rates are higher or lower than expected.

What grants are available?

Various grants have been or are available for rainwater harvesting projects.

The following are potential sources worth checking out:

This fund is designed to support businesses to invest in equipment and technology to improve sustainable agriculture reducing impact on the environment.

Defra says it intends to retain equipment for rainwater harvesting on FETF round two in 2023, in the Productivity and Slurry grant. Applicants will need to be registered on the Rural Payments service.

Support for various capital items for rainwater harvesting systems, including above- and below-ground tanks, diverters and downpipe filters are available in CS schemes.

To receive funding, applicants must obtain prior approval from Catchment Sensitive Farming. Applications must seek to achieve one or more of the following outcomes:

For example, Severn Trent has match-funding available through its Severn Trent Environmental Protection Scheme until 31 January 2023.

Rainwater harvesting equipment could be eligible for tax relief under this scheme.

It allows businesses to write off 130% of the cost of qualifying plant and machinery against taxable profits for purchases made in the 2022-23 tax year.

Albanwise Farming’s prospective rainwater harvesting system is being driven from a technical perspective by a desire to make better use of herbicides on the 2,650ha arable unit.

“The way to mitigate that is to buy wetters and water conditioners which, up until recently, were more expensive than glyphosate.”

Rainwater, in contrast, is neutral or very slightly acidic, so those problems disappear, and reliance on mains water is also reduced.

A redevelopment to upgrade workshop facilities and build a new chemical store and sprayer filling area is giving the opportunity to include a rainwater harvesting system, as well as extend a roof-mounted solar array.

Discussions with the local Catchment Sensitive Farming adviser around a new Higher Tier Countryside Stewardship agreement highlighted the potential for capital items payments for rainwater harvesting that might cover most of the infrastructure costs.

Under the plans, which would cost about £70,000 without grant help, water will be harvested from three buildings in the yard.

I will then be put through a catchment tank and filtration system into a 500,000-litre storage tank, with the outlet routed into the new sprayer filling area.

Together with an additional 250,000-litre tank fed by rain collected from a grain store roof on a satellite unit there will be enough total storage for half of the farm’s annual water requirements.

“With a bit of in-season rainfall, hopefully we will get to 70-80% of our spray water requirements.”

Following on from building a new dairy processing plant six years ago, a 50x50m, relatively low-roofed building is being erected.

It will house the milking parlour, equipped with three Lely robots, plus all the cow feeding troughs, newborn calves and cows that are going to calve, Mr Andrew explains.

“It’s going to replace all the existing asbestos-containing old buildings.”

A burst water main following Storm Arwen in November 2021 highlighted the potential threat to the farm when water supplies were cut off for two days.

This necessitated the fire service bringing water for the 90-head herd to drink after a 5,000-litre backup tank had been drunk dry.

That has led to plans to install an underground rainwater collection tank as part of the new development.

Harvesting rainwater will help reduce the amount of water going into an open slurry tank, leading to better quality slurry, as well as reducing volumes stored.

A good relationship with experts at the University of Sheffield, where he supplies milk, has enabled him to get advice about how to treat and store collected rainwater for drinking.

“We’re currently working out how much water we want to store, and the design of the system,” he says.

Usage will include washing out, as well as drinking, and even potentially irrigating nearby pasture fields after the drought last summer left them parched.