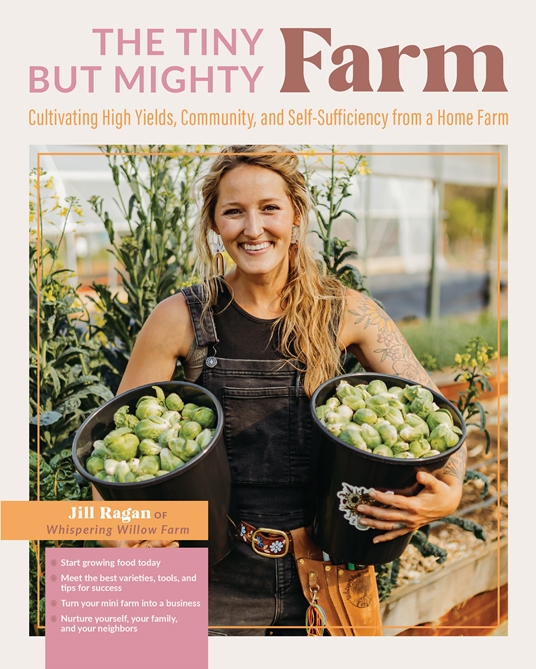 Stop me if this sounds familiar: You love your backyard garden, but because of the size and space limitations, you never thought it could grow beyond a hobby. You’ve eyed up the booths at the farmer’s market and happily given squash and rhubarb away to friends when you have a surplus bounty. But still, your little patch of dirt couldn’t possibly make you any money.

Instead, you think to yourself “my garden is too small to actually make any profit.” “Who would I even sell to?” “I don’t have the space to scale a business properly,” while you weed and prune and tend to your plants.

If you’ve looked out over your garden plot and thought any of those things before, Jill Ragan would like a word. The proprietor of Whispering Willow Farm, who also runs a popular YouTube channel documenting life on the Arkansas farm, has made it her mission to help everyone get the most out of their garden—no matter what the size. In her new book, The Tiny but Mighty Farm, Ragan walks readers through the basics of everything from plotting out a garden to germinating seeds to supporting other producers in your community. But most importantly, she debunks the myth that only those with multiple aces can have a successful farming business—something she discovered first-hand when she and her husband first began farming.

“When we bought our first piece of land, we were broke … We couldn’t afford more than an acre,” says Ragan. “At first, I felt really defeated by that.” She worried she would only be able to grow enough to feed her family; she certainly never imagined that she could feed a whole community. But when she started speaking with other small farmers—such as Ray Tyler at Rose Creek Farms, who successfully farms on only an acre—it changed her perspective. “That’s when I started thinking, ‘I don’t need to spend more money on more land, I need to spend more money educating myself on how to use my land better.’’

So, that’s what she did. She plotted out garden patches, ensuring every bed was positioned optimally, and researched garden tunnels to learn how to protect her crops from the elements and maximize output. After all that work, she came to another realization. “When you scale up your land, your inputs go up, too,” says Ragan. “It’s going to take you so much longer to pay yourself back the debt that you’re in. If you would have just stayed small … you probably would have been better off.” That’s why one of the key tenets in The Tiny but Mighty Farm is not just to start small but to not be afraid to stay small. It’s entirely possible to build a business from your suburban backyard garden—and Ragan is happy to coach you through it.

But before you even put your hands in the dirt, the first step, she says, is to define the pillars, values and visions for your business, which are the immovable core tenets, the guideposts for growth and your goals and dreams. Ragan adds that it’s important to sort out each of these beliefs from the get-go, since they will ultimately influence how you operate.

“If you’re going to grow food, you might have that fork in the road where someone’s asking you to compromise,” says Ragan. Maybe you are a completely organic grower or maybe you’ve committed to no-till practices. Maybe you’re a conventional producer, but you know that you’re keeping half of your land untouched because you want to use it for something else. Whatever you’ve decided, Ragan says to make that promise to yourself and let those promises guide your decisions. Ragan advises growers to write down their values and put them somewhere visible (hers are posted on her dining room wall) so they can be referred back to whenever needed. Once you’re clear on what you actually want out of the business, it’s time to get to work.

Ragan has filled the book with charts and notes sections to help with things such as plotting out succession planning and mapping out a garden, which readers can copy or fill in directly. Using notes, maps and spreadsheets is crucial, she adds—especially when utilizing a small space. “I didn’t want this to be a coffee table book. I want dirt on the pages, I want you to jot notes down,” says Ragan.

She recognizes that kind of organizational impulse doesn’t come naturally to everyone. In fact, it didn’t come naturally to her, either. “I’m not going to lie, that’s not who I am at all,” she says. “I’m totally a free spirit. By nature, I’m not an organized person.” But after a few months of trying to wing it on the farm, she realized that simply wasn’t going to work. “I may hate [spreadsheets] with every fiber of my being, but the farm was suffering because I didn’t have these systems in place.” Today, Ragan credits the success of her farm and business to those spreadsheets and organizational systems—and they can help readers get started, too.

One of the most important things to schedule into those charts and planners is rest time—and not only once you’ve done the work, planned out the garden and finished your first planting. No, says Ragan. Plan for regular rest and relaxation throughout the process. Farmers and growers of all sizes can burn out, especially if they’re also attempting to sell their products.

“It may sound silly, like why do you need to block out time for relaxation? When I walk into the garden, I immediately see fruit that needs to be harvested, beds that need to be weeded or something that needs to be stalked up a trellis, and it’s my natural instinct to go and fix the problem,” says Ragan. “But when you constantly do that, you’re never enjoying the bounty of what you’ve worked so hard for.” Ragan says she learned to schedule blocks of 30 minutes at a time where she would go and sit in the garden: just sit, without worrying about the work that needed to be done. Even if you have one raised bed or an acre of land, it’s the same principle. You’ve worked hard, she says, so give yourself time to enjoy the literal fruits of your labor.

The Tiny but Mighty Farm is for hobby gardeners, full-time farmers or anyone looking to get from one end of the spectrum to the other. But no matter where you are in your journey, Ragan believes you’re ready to grow. “Don’t wait. The more you wait, the more you’re going to make excuses,” she says. “The only way you’re going to know how to farm and garden is by getting your hands dirty and making those mistakes. Don’t hesitate, don’t question yourself. Just dive in.”