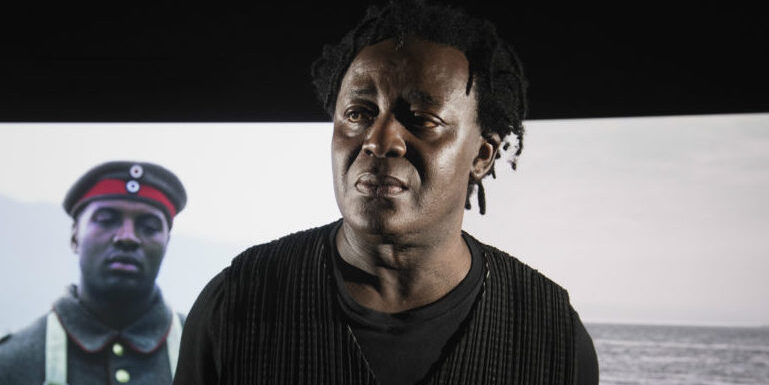 British Ghanaian filmmaker and artist John Akomfrah has been selected to represent Britain at the Sixtieth Venice Biennale, to take place April 20–November 24, 2024. Akomfrah, who was knighted this past New Year’s Eve in recognition of his contribution to the arts, is widely known for his incendiary multiscreen installations themed around imperialism, migration, slavery, racial injustice, and climate change. His work earlier appeared in the 2015 and 2019 iterations of the Biennale.

“The quality and contextual depth of his artistry never fails to inspire deep reflection and awe,” said British Council global director of arts Skinder Hundal, who is commissioner of the British pavilion, in a statement. “For the British Council to have such a significant British Ghanaian artist in Venice is an exhilarating moment.”

Born in Accra, Ghana, in 1957, Akomfrah arrived in England as a child, as his family fled political unrest in his home country. He first gained attention in the 1980s as a cofounder of the pathbreaking Black Audio Film Collective, whose work repositioned Black British people in the media. Among his best-known works are Purple (2017), an immersive six-channel work centering on the climate crisis; Vertigo Sea (2015), a triple-screen installation that places the whaling industry and its attendant violence in conversation with the harrowing experiences of migrants making perilous sea crossings; the three-channel video installation The Unfinished Conversation (2012), about British Jamaican activist and cultural theorist Stuart Hall; and Mnemosyne (2010), which focused on the experience of postwar immigrants to the UK. In 2017, he was awarded the Artes Mundi prize, the UK’s highest international art honor.

“I’m grateful to be given a moment to explore the complex history and significance of [the British Pavilion] and the nation it represents, as well as its architectural home in Venice, with all the stories it has told and will continue to,” said Akomfrah in a statement.