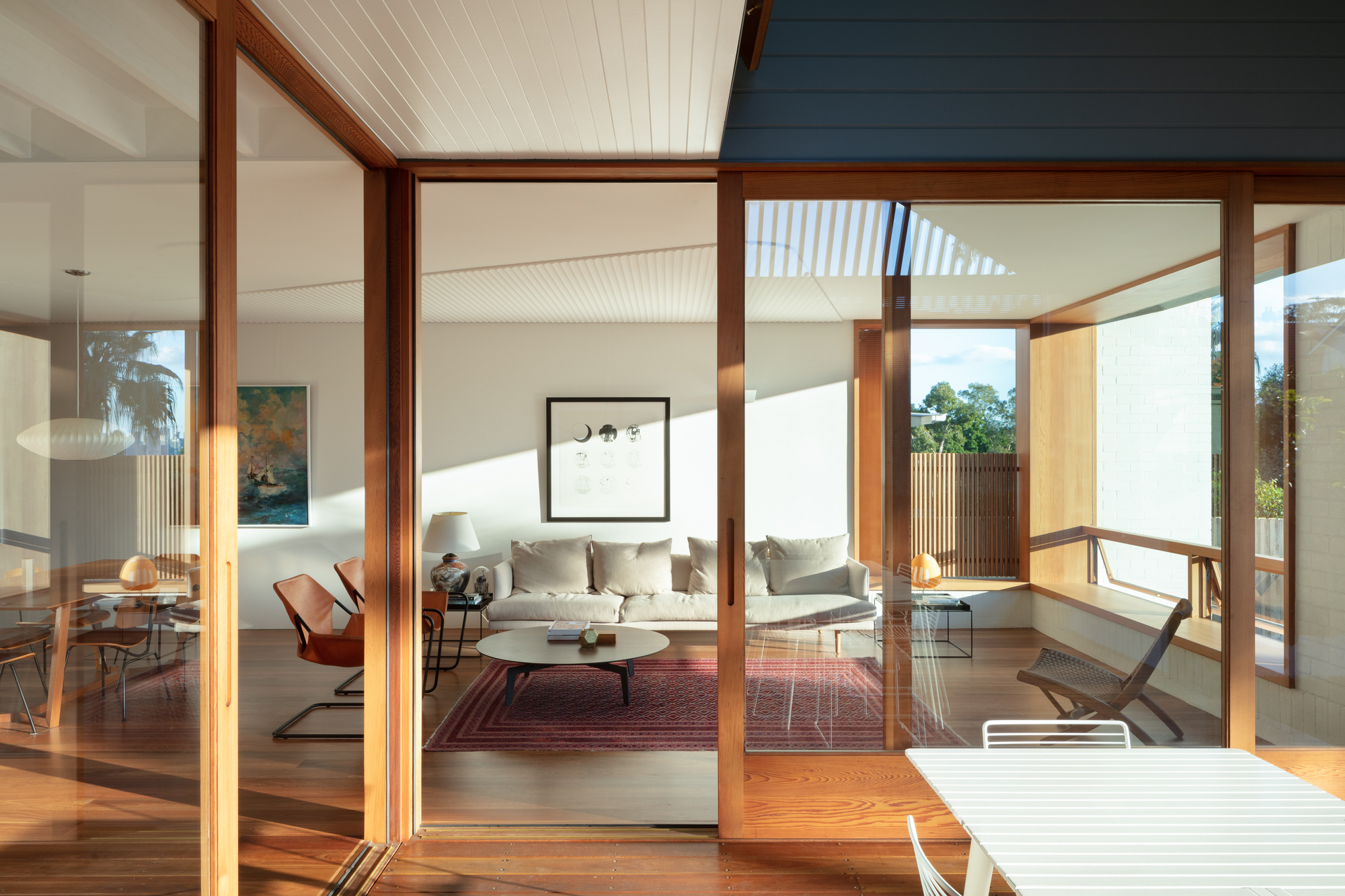 Text description provided by the architects. Mosman, Australia. Situated in coastal suburban Sydney, Mosman Minka respects the area’s conservative built heritage but subverts its traditions by embracing Japanese sensibilities. Retaining the original frontage, the rear spaces are enveloped by an oversized zinc canopy, whose vaulted forms lend spaciousness to an otherwise highly efficient footprint. With a focus on place-making, proportions, materiality, and detailing drawn from the family’s collective memories. The design embraces family life’s dichotomies: it is at once calm and restful (an important counterpoint to hectic family life), whilst equally playful and punctuated by numerous moments of delight.

The Client – The home of a professional couple, their two young children, and their Burmese cat, Mosman Minka also houses their shared studio.

The Site & Brief – As the home of a family of four the design required a robust and agile response to the many demands of busy family life. Also housing the couple’s studio, (which would continue to operate from the site throughout the construction period), the design had to practically balance the programmatic requirements of the brief and construction methodology, with the opportunity to craft a sensitive and highly personal response to the question of home. Whilst the original house had strong bones and good proportions, the existing house had little relationship to the landscape, and dwelling within it consequently was constrained. It was imperative that the design would ‘ground’ the house within its site and establish a sense of place and belonging. Sited on a continuous rock shelf of Hawkesbury sandstone, submerged only centimeters from the surface, the original house suffered from dampness. Whilst there was a generous backyard, this and the rear of the house faced due west, with few established trees to shield the outdoor spaces. Conversely, there was a wonderful opportunity to connect with district views and open up to easterly coastal breezes.

Constraints – In approaching the design, a balance had to be struck between the programmatic requirements of the brief, the orientation of the site and proximity of existing structures, within the constraints of the budget, whilst living and working on site. Located within a traditionally conservative area, it was important to respect this heritage, an established pattern of mass and form whilst testing and consolidating the practices’ theories and architectural sensibilities.

The Architects’ Response – As one of a series of Federation-era houses within the streetscape, the design speaks of the importance of caring for our older buildings, not just through restoration but also through a considered and expressive response, which connects to its heritage context without mimicry. Eschewing a large overt addition in favor of being a polite, discreet neighbor, the generosity of the roof form is further evidenced in its minimization of bulk and overshadowing impacts, and the willing concealment of the first storey within the roof form. Retaining as much of the existing fabric as appropriate and expanding little from the existing footprint – a conscious valuing of the landscape over the building – the existing front half of the house and double brick external walls at the rear were retained, which support the new platform containing kitchen, family, dining, and deck areas. Above bedrooms and bathrooms are cradled beneath their zinc canopy.

Driven by a financial and socially responsible imperative, we asked how we could achieve the functional requirements of the brief while also building less. Conscious of minimizing the physical and carbon footprint, the design retained and re-used materials where possible, utilizing reclaimed brick, locally crafted timber windows and doors locally fabricated structural timbers and cladding, and high-performing wool insulation. A solar array and water heated by a heat pump powers the house. The asymmetric zinc roof reinterprets the traditional terracotta hip roofs of the area, elevating the traditional and contemporary by their contrast. The particular geometry of the roof is generated by its orientation and relationship to neighbors. Underneath that canopy, spaces borrow light, air, and outlook from one another yet retain their own spatial characteristics and personalities. Glazed and timber-paneled openings offer prospects to key district vistas, and channel views to the sky and garden, whilst creating privacy for both inhabitants and neighbors. Children’s bedrooms filled with sunlight, create places of rest and play. The canopy as a fifth elevation is punctuated by a series of skylights that capture prevailing coastal breezes, enabling passive ventilation and lighting of spaces, tracing the movement of the sun throughout the day, and the moon, and stars at night.

Named in reference to the Japanese housing typology of the ‘minka’, (which is characterized by a large roof under which multi-level spaces are arranged), the building’s roof form was the primary formal and structural response to the requirements of the brief and issues with the site – including strong westerly exposure, privacy and overlooking issues. The deep protective eaves and large raking roof contains and protects the interiors, whilst directing the view out to the landscape, allowing for continuous desired indoor/outdoor connection irrespective of weather. This form also allows for excellent passive heating and cooling, including the protection of glazing in summer and allowing for thermal gain in winter. Multiple openings capture prevailing cooling breezes, or alternatively when no breeze is available, pressure differentials between openings allow hot air to be exhausted via high-level skylights.