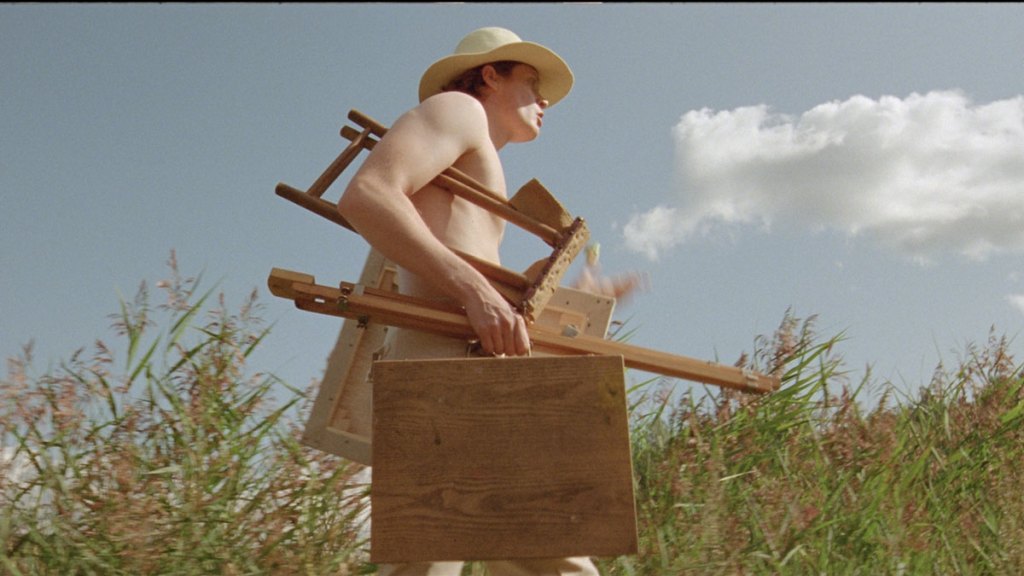 Norwegian painter Edvard Munch (1863–1944) is best-known for The Scream (1893), his iconic Expressionist masterpiece of a man, hands on cheeks, uttering what can only described as a disturbing chill of distress, and that has been endlessly parodied in the decades since. But in Henrik Martin Dahlsbakken’s new film, Munch, which opened the 2023 International Film Festival Rotterdam as an out-of-competition screening, the work barely ever comes up in the 105-minute, Norwegian-language biopic. It’s rather refreshing.

To encapsulate the artist’s 80-year life, Dahlsbakken has made several interesting casting choices. Four actors embody the various periods of Munch’s life: Alfred Ekker Strande (at 21), Mattis Herman Nyquist (30), Ola G. Furuseth (45), and Anne Krigsvoll (80). Interestingly, Dahlsbakken has also cast a woman, Lisa Carlehed, to play Swedish writer August Strindberg, who Munch met in Berlin. In one scene, shot in what looks like a modern-day rave, Carlehed had a mustache drawn on her face, adding to the farce.

If Strande and his puppy dog eyes fake heartbreak to perfection, Nyquist’s performance climaxes in a stuttering monologue about the very meaning of existence: “It should be our mission to [defend our beliefs] or else just lie down and die.” Furuseth gives a lost, yet very charismatic Munch, about to surrender to depression, while Krigsvoll’s convincing transformation into Munch at the end of his life could not have been smoother. Not only is she unrecognizable but she manages to subtly turn a notorious misanthrope into a touching character.

Munch doesn’t present a linear timeline to the artist’s biography, which at first can be a bit jarring for viewers who don’t know much about Munch—or quite fun for those familiar with his life and career as they try to guess when and where the plot takes place. Rather, viewers travel to different cities—Ekely (near Oslo),Copenhagen, Åsgårdstrand, Berlin—and the plot ebbs and flows between these locales and Munch’s different portrayers. The blurring of timelines and genders is meant to convey the confusion that Munch felt, by his own admission, throughout his life.

With that intriguing approach, the movie opens with the 80-year-old Munch, facing his easel. Upon hearing a dog barking outside, he rushes downstairs, only to see a couple of German soldiers standing at the gate. (Germany had invaded Norway in 1940, roughly three years prior, and Munch lived in fear of his works being confiscated by the Nazis.) The unexpected, and presumably unwanted, guests invite themselves in, and start asking questions as they look around: “How much are these? Are you a famous artist? You should make sculptures.” As the camera scans the room, an upside-down version of the painter’s famed Madonna (1894) turns up among other canvases. “Sculpture is not for me,” he replies; famous he may have been, but all he tells the soldiers is that his paintings don’t sell as well as they used to.

It’s obvious that this scene is setting up a flashback to Munch’s earlier days. Naturally, the next scene transports Munch (Furuseth, the 40-year-old version) to Copenhagen, where he is writing, smoking, and drinking himself away in a café. Once home, he starts hearing voices and begins crawling on the floor. Is he simply hungover—or is there something else at play? There’s silence as the screen cuts to black.

Munch wakes up in a hospital in nearby Frederiksberg, where he stays from 1908–09 and meets Professor Daniel Jacobson (Jesper Christensen), who becomes the subject of several drawings and paintings. This period of Munch’s life was filmed in black and white and in a square format, clearly with the aim to create the claustrophobic atmosphere the artist likely experienced during his stay.

As Munch wakes up one morning, the sound of roaring train begins to play, as the film returns to the initial 16:9 format, now with scenes are bathed in light. A red-haired Munch with angelic features (Strande) daydreams on a train to Åsgårdstrand, south of Oslo and the location of one of Munch’s best-preserved homes. There he is, painting in the open air, not the fjord that unravels before him but a rough version of Sick Child, first begun in 1885. “You are not quite there yet but I like the colors,” a passerby remarks.

Munch soon meets his first love and confident Mrs. Thaulow (Thea Lambrechts Vaulen). “I like melancholy,” he tells her—that’s the title (with a capital M) of the painting, showing a man pensively staring at an unnaturally colored shoreline, that he featured at the important 1891 Autumn Exhibition in Oslo. His travels to Paris, where he would see the works of the era’s avant-garde that would ultimately prove influential on his style, are oddly somewhat elided. When asked about the trip, he dodges the question, saying “It was nice. There is not much more to say.”

The final stop: Berlin. Not the late-19th century Berlin that Munch knew, but a Berlin seemingly closer to our time. Here, Munch (Nyquist) is touching up paintings in a confined white cube, like one you might now see in any major gallery district. A minute later he’s told of the decision to shut down his first solo show. (Dahlsbakken is alluding here, without mentioning it, to the 1892 “Munch Affair,” in which an exhibition of the artist’s was closed after a week after it provoked controversy.) Someone keeps calling him—on an old-school cell phone, no less! Were people walking around with cellphones at that time? It’s an intentional anachronism. As gratuitous as it may seem, this temporal gap does the trick—anyone can relate to Munch’s frustration. The feeling is universal, Dahlsbakken would have you to believe, however heavy-handedly.

As the movie progresses into the latter two thirds, we keep jumping back and forth to those time-spaces at random. One minute you are in Berlin, the next, quite literally, in Copenhagen. Scenes grow shorter and shorter to enhance the feeling of timelessness—to the point where there is no (chrono)logical order. Most timeline transitions are subtle: old Munch starts coughing, triggering a conversation 40 years earlier about his mental health with Jacobson. “My soul is like two wild birds that tear in different directions,” the painter says. “Geniuses suffer from a spiritual imbalance which might be misconstrued with insanity,” the psychiatrist replies. The image may be crisply black and white; the expert’s opinion comes off a rather muddy grey.

Other tricks, verging on gimmicks, are used to blend the dream and real worlds together. In the Copenhagen segments views from high and low-angle shots alternate and voices sound dampened to convey a sensation of dizziness. When he tells the story of how his sister Sophie died, the Sick Child, which shows her bedridden with tuberculosis, resurfaces but this time slightly animated. Some frames combine painted and filmed elements. For example, Nyquist rides a bike against a painterly sky, echoing Munch’s palette and brushstrokes. Those effects are instrumental in giving rhythm to a movie that is heavy on dialogue and aesthetics, but thin on plot.

As the old Munch fades out, an engraved version of The Scream finally makes a brief appearance, paving the way for a stream of paintings shot in Oslo’s Munch Museum, which holds some of the artist’s most important works. It feels like a promotion for the museum’s spectacular new building, opened to the public in 2021.

If you came expecting an in-depth exploration into Munch’s life or his mind, filled with solid facts, names, or dates, you may be disappointed. Some dialogue borders on pop psychology. Neither mainstream nor esoteric, the movie falls short of explanation. It’s hard to know where the director is going. The soundtrack, sets, the actors are up to the task but is it enough? The viewers are left we one basic notion: Munch was a tormented artist who avoided Nazi confiscation by donating his works to the city of Oslo. And that’s pretty much it.