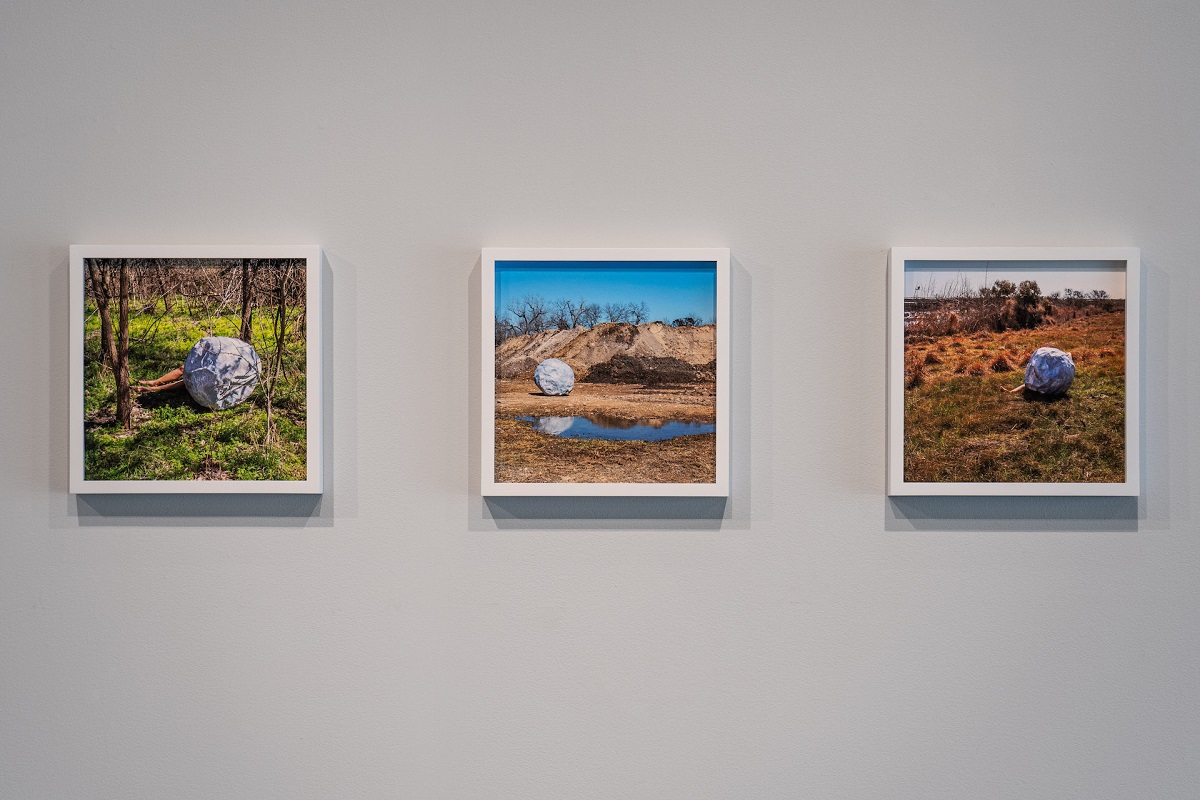 TUCSON, Ariz. — Constructed and divided environments essentially become conversations hinged on power, of which borders are often a central manifestation. For Tucson-based multidisciplinary artist Nazafarin Lotfi, this relationship to land and landscape — and the ways it is constructed and divided, specifically in the Southwest — illuminate the tension between the natural world and the world manipulated by humans.

“The border was interesting to me as someone who carries the border within herself,” Lotfi told Hyperallergic in an interview, relating her experiences as a person growing up in Iran and as someone who immigrated to the United States, and the parallels and differences to the environment she currently resides in. “I have always wished there were more intersectional conversations around border crossing and borders in general.”

Borders, their birth, and their fortification are inextricably linked to and perpetuated by colonization, imperialism, and nationalism. In Western art history, fabricated representations of “wilderness” and “vacant” landscapes in the United States enabled, emboldened, and endorsed manifest destiny and western expansion, creating a narrative that if these lands were empty of peoples (which of course, they were not), then they are for the taking.

These investigations led Lotfi to analyze her own cultural experiences regarding land, landscape, and architecture, and how those can be malignant forms of power disguised through beauty.  “I started questioning what was the relationship between landscape and architecture in Iranian culture,” she stated. “Manmade spaces versus natural spaces — these ideas of identity are built in relationship to both.”

Over the past three years, Lotfi has turned her attention to Persian gardens. Gardens, as quasi-utopian spaces, hold within them domination and maneuvering of what is “natural” into what is desired. In her 2022 series Maps of No Return, Lotfi uses collage and colored pencil on paper to map out topographies of imagined and historical gardens. These works center on colonial forms of beauty, symmetry, and a sort of control over nature — which of course, includes this idea of the border. “I call all my drawings maps, and these maps are really useless in terms of giving you a specific location, but they’re helpful in constructing an essence of enclosures — the number one step to creating inside and outside, the self and other,” she said.

Lotfi’s work explores the binary of borders as well. In her Counter Landscapes series, she shifts the map drawing to one that upends the colonial structures of the garden and allows it to be reflective of the organic environment itself, referencing colors found in the Southwest region, as well as rubbings of branches, rocks, and other natural materials collected in the Sonoran Desert. By drawing attention to and highlighting borders, Lotfi wedges a sharp critique, and in many ways, erodes the foundations on which borders are built, creating an imagined borderless future.

In A Garden to Build, Lotfi creates a link between the body and land, monumentalizing and perhaps memorializing the horizontal form – that is often associated with inferiority. “The deceased, the wounded, the dead, the female — in European tradition there’s the male vertical hero and the wounded is lying down, the reclining female, the animal.” These papier-mâché sculptures look like shrouded figures, hauntingly spread out on the ground, blurring the line of ground and body. Though Lotfi is monumentalizing this horizontal space and what that space can represent, she does it in a medium that is at odds with the idea of monuments — paper, placing an ephemerality on the work as a whole. Her skillful navigation of complex histories, territories, and identities intersect in works that push the viewer to consider separations of lands and cultures through nation-building and power.