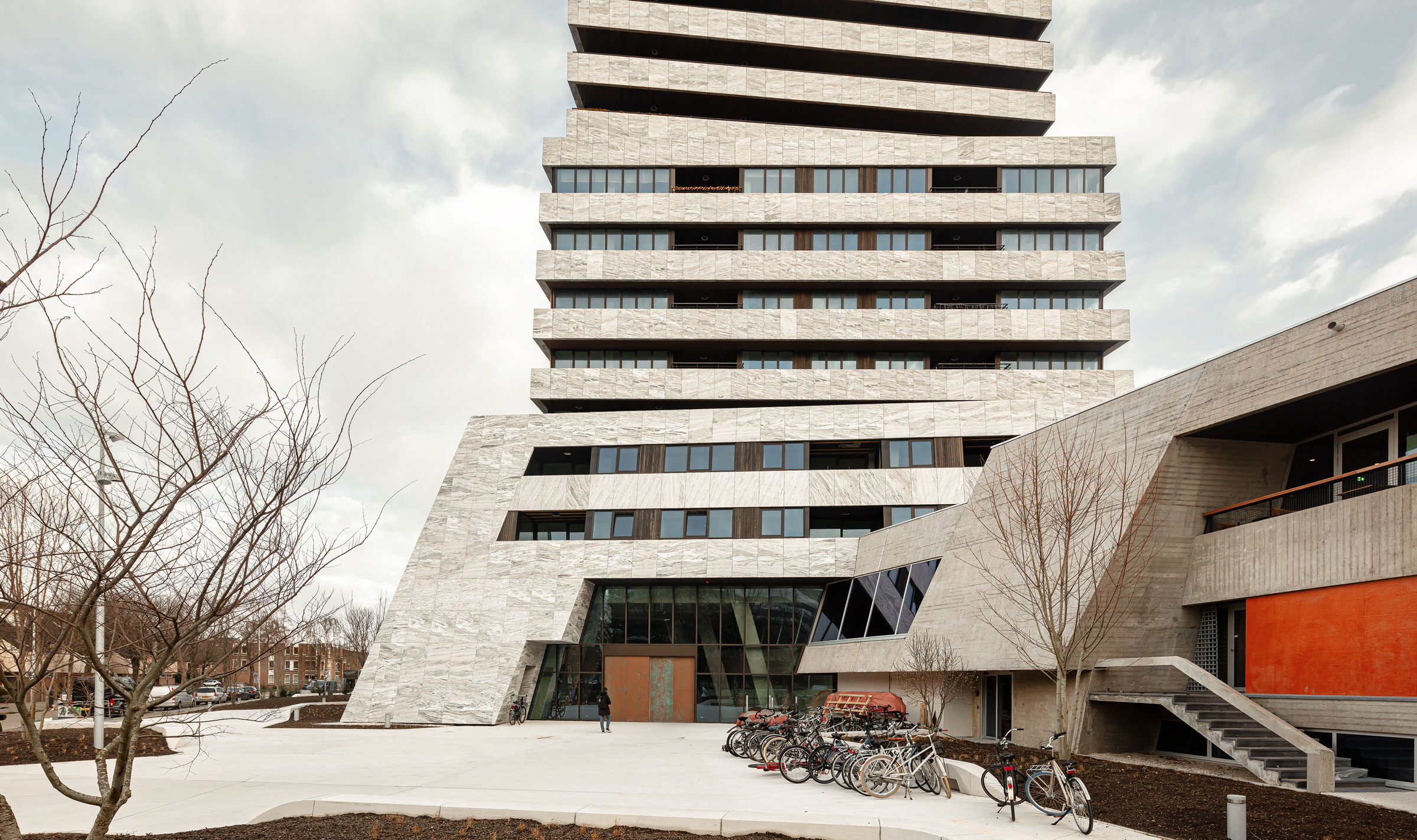 The following description is courtesy of the architects. Hugh Maaskant’s 1970s classic was the original mensa and fraternity building of TU Eindhoven. The students nicknamed it ‘the Bunker’ given to its brutalist structure. In recent years, however, it had fallen into disrepair, and only narrowly escaped demolition. Together with developers RED Company and Being Development, we won the 2016 competition set by the University of Eindhoven to decide the Bunker’s future. By adding a residential tower, we generate the extra value needed to fund the painstaking restoration of the original building. Adding the tower also allowed underground parking, enabling the transformation of the existing parking lot into a public park surrounding the complex as designed by DELVA Landscape Architecture & Urbanism. With its green surroundings and unique residential opportunities, the Bunker brings a new impetus to the whole area and Eindhoven as a whole, as it joins several new architectural landmarks in the city.

Our design daringly unites the new residential tower with the original structure, by adopting the language and materiality of the old Bunker. Rather than resorting to traditional solutions of designing ‘around’ monuments – with either a strict separation or a strong contrast between old and new – we made the new tower a bold and imaginative continuation of Maaskant’s architectural style. The new residential tower is flanked by the two wings of the original structure, which houses a semi-public café, lobby, and an office space. The base also houses several of the 210 apartments that the tower contains. In three distinct sections, Bunker Tower lifts Maaskant’s design language into new territory, twisting dynamically and becoming progressively lighter and more open as it rises.

‘Bunker Tower reveals so many sides, different vignettes, depending on where you are in the city. And every apartment has different views, despite the repeating floor plan.’

The tower’s asymmetrical and stepped form again channels Maaskant’s design and presents varying perspectives from different parts of the city. The greater expanses of glass at the top of the tower symbolize the reopening of the previously boarded-up building to the city, and provide wonderful views for the new residents. Adding the tower also allowed underground parking, enabling the transformation of a paved parking lot into a surrounding public park – additions which effectively boost the entire area. Now preserved for the future, the former Bunker gains a new lease of life thanks to the Bunker Tower.