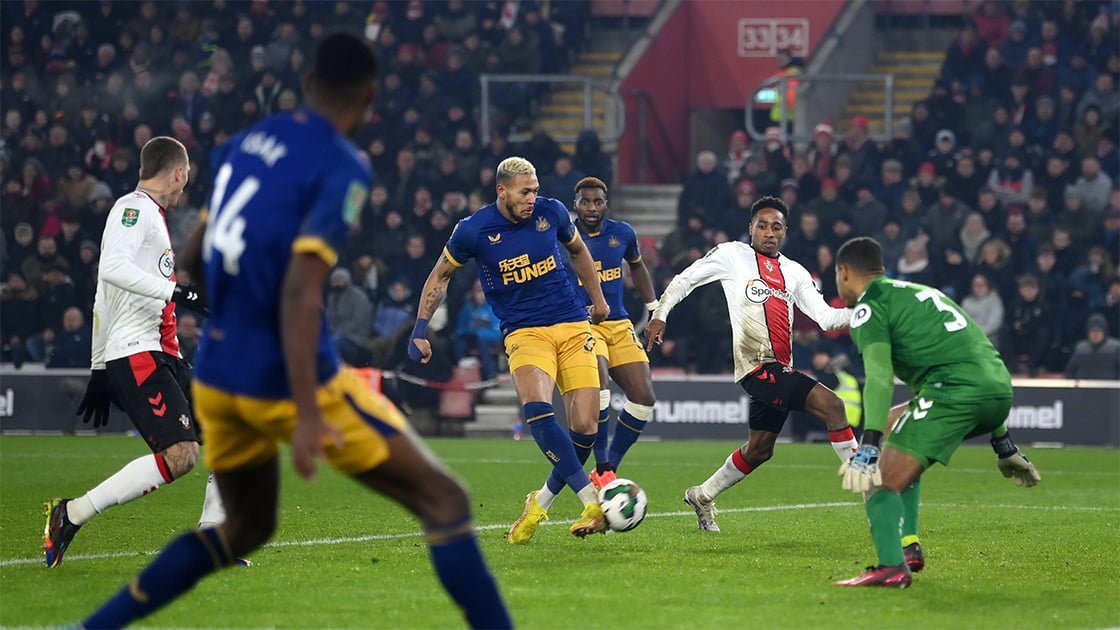 Back in the day, Southampton fans used to be rubbing their hands at the thought of Newcastle United coming down to the south coast.

It was a long tale of misery for so long and my personal low point was March 1995 at The Dell, Newcastle leading on 86 minutes having scored in the first half through Kitson and yet NUFC still managing to lose 3-1.

Eddie Howe has changed all of that and in the space of ten months Newcastle have played and won three times in front of the Southampton fans at St Mary’s.

Bruno Guimaraes scored in those first two victories but this time had to settle for the man of the match award, having helped Newcastle United dominate the match, only a 15-20 minutes spell in the second-half saw the Saints get competitive.

Southampton fans haven’t taken this latest defeat too well…unsure exactly who to lash out at, so deciding on having a go at pretty much everybody.

As well as their own manager and most of the home players, Southampton fans, apart from the odd voice of reason, finding some interesting NUFC targets.

Maybe the best one is a belief that it was sheer arrogance for the Newcastle team and players to be celebrating at the final whistle…the reasoning being that this is supposed to be proof that everybody of an NUFC persuasion believes they are already on their way to Wembley.

So by that reasoning, if say the first leg had been at St James’ Park and the visitors had won 1-0, the Southampton players and fans wouldn’t have been celebrating…?

‘The Newcastle players celebrating with their supporters at the end.

They think they’re through.

I trust that hasn’t gone unnoticed by Saints’ players and coaches.

It’s only half time. Better teams than Newcastle have fu..ed up when the pressures on.’

‘Does anyone know if any of the bare chested tw.ts ended up in the General with hypothermia?’

‘2 games running we have seen 2 VAR decisions go against us, both seemingly following, what I don’t like in the game, harassing the referee by the opposition players en masse.

Your sitting there thinking come on Prowsey or anyone get into that conversation and break up the one way flow of words into the refs ear. You watch the opposition players when one of theirs commits a “crime” they are all around him trying to change the subject.

Pope on Djenepo if that was Che on Burn anywhere on the pitch Che would have been pulled up – that was reckless play that ultimately forced a substitution upon us – where were the Saints players in the refs ears nowhere. Like I say I don’t like it but just about every other team is playing the get at the ref card.’

‘Well that’s going to just delay the inevitable pain – we’ll all feel a sense of hope that we can score at St. James but of we won’t.’

‘My issue with Mara is he’s too isolated – his excellent goal against City came from good positional sense and an excellent assist…how often do we see that happening? He can’t go past 5 players especially Newcastle’s defence, but that’s what Jones expects him to do it seems!’

‘Overall I didn’t come away too disappointed. Newcastle have won a lot of games this season by doing exactly what they did to us, so we can’t take it too hard.

I did think we genuinely looked like an improved side.

They had multiple chances from cut backs so their goal did look inevitable, we never seemed to be tracking Joelinton and Willock.

Adams had the best chance by far and did exactly what we all expect of him by hitting it hard and hoping.’

‘In the first half we were poor and could barely string two passes together, and time and time again Newcastle seemed to have an overload on our left hand side and were cutting through us far too easily. Not sure why their goal was disallowed but we were lucky to be goalless at HT.

Much improved second half, was nice to see us come out and actually have a bit of a go at them and they kept gifting us back the ball for fun, as we were in the first half. But we really needed to make it count when we were on top, unfortunately it was the same old story with Che unable to score.

Armstrong actually looked lively and made a decent impact. Again not seen any replay of the disallowed goal but those few minutes where they scored and then ours was chalked off changed the game and all our belief drained away, an all too familiar feeling. Once DCC was sent off it was game over and just trying to keep it at 0-1.

Only one goal conceded again (although they did miss a few sitters) and it does feel like we’re getting harder to break down. Sadly we just don’t have anything like the quality Newcastle do but I thought we gave it a good go and at least are still in with a small chance.’

‘JWP wasn’t as involved as Howe ensured the ball was kept well away from him. They ruthlessly attacked where he wasn’t. or ran at pace past him.

Yet again Howe’s strategy is way above our managers.’

‘Anyone surprised that Pope wasn’t penalized for charging out and going through Djenepo.

No doubt Baz would have got a red for that…’

‘I thought that even if it was an innocent tackle that putting an opponent in danger was a sending off offence. He should have been sent off

Sky made nothing of it, having 2 Newcastle pundits didnt help. Frannie is too nice, he didnt really fight our corner, no aggression in the studio like he did on the pitch. No passion at all IMO, he is a massive Saints fan but was far too meek in his assessment with Given and Ferdinand giving it big. ‘

‘Newcastle just looked a superior attacking unit most of the night and the arrival of Saint-Maximin and Isak highlighted their edge. Good second half from Saints though – there’s still a flicker of hope left in this season – especially if a long awaited/needed striker arrives.’

‘Jacob Ramsey is now added to the list of players I detest. He should have been booked how he waved off Carr. He was not only doing it to Carr but us.’

‘Before you despatch the assassination squad…………. it was Murphy’

‘Personally I thought what Murphy did was pretty funny, roles reversed we’d be lapping it up.’

‘You can’t just count our misses when you say we could have gone into the second leg 2-1 up – if you include Newcastle’s misses they’d probably be going into next week about 5-2 up.’

‘Not only surrounding the ref, our players should have been squaring up to Pope and letting him know what they thought of that reckless challenge – imagine what the Newcastle players would have done if one of their’s got clattered like that – look how they reacted when Bruno got a few digs that were minor in comparison. We are just not nasty enough and so get bullied.’

‘Good atmosphere and a pretty good game against a side who are obviously well-oiled and playing with a lot of confidence.

I was surprise KWP was matched up with Joelinton and Salisu with Almeron. Would have had KWP at LB and Lyanco on Joelinton.

That’s two games in a row where we’ve survived an onslaught, got on top and then conceded against the run of play. It gives hope but is really frustrating

Clearly we weren’t clinical enough but to fair nor were they. They overloaded us on both flanks and could have scored more.

The tie is not over. Jones will send them out next Tuesday to have a right go. I’m just hoping some toon complacency and a Man City repeat will see us make Wembley.’

‘Eddie Howe and Jason Tindall are the most sly in the league at being in the ear of 3rd official.’

‘No doubt they’ll address the imbalance for the game up there and have 2 Saints-connected pundits and just 1 Geordie in the studio – probably Shearer and McMenemy tho!’

‘Yes, that was a low act by Murphy. He’s high up on my list of complete w..kers.

Towards the very top for me is Bruno Guimaraes. What an absolute c… he is.

Who cries about an injury and then two days later is playing. And laughing in DCC’s face when he got sent off. Utter pr.ck.’

‘Saint Maximan has three haircuts on one head.’

‘If Joelintons wasnt ruled out by VAR

If Joelinton didnt sky it from 5 yards

Sad to say that 1-0 Newcastle is probably the fair result marginally.

‘Saints reduced to little more than a shambles.’

‘That’s what they will write on our relegation gravestone.’

‘Perfect result. Last thing we wanted was Newcastle needing to come out on the front foot at SJP.’

‘Newcastle on top for a lot of the first half. Blazed over their efforts. We, and most do, struggle from teams passing through us.

Second half, we came back into it in spells. As usual, we didn’t take advantage of it, with a fair Che chance. Then, as usual, we concede from a fairly avoidable error. We did manage to get back into it, only for it to be ruled offside. We didn’t offer much after that.

Newcastle are a much stronger, balanced team than us. Our failure to bring in a striker and keep the midfield solid will cost us in every game. We will always be likely to lose by fine margins, even at our best.’

‘Had to look up who murphy was cos i’ve never heard of him, he’s 27yrs old, played mostly in the lower leagues and waving off a bloke whose played in a world cup.’

‘Considering the number of very presentable chances they had we were lucky they only scored one.

Armstrong handball slightly unlucky but the ruling on that is clear, despite what the hapless Don Goodman was babbling.’