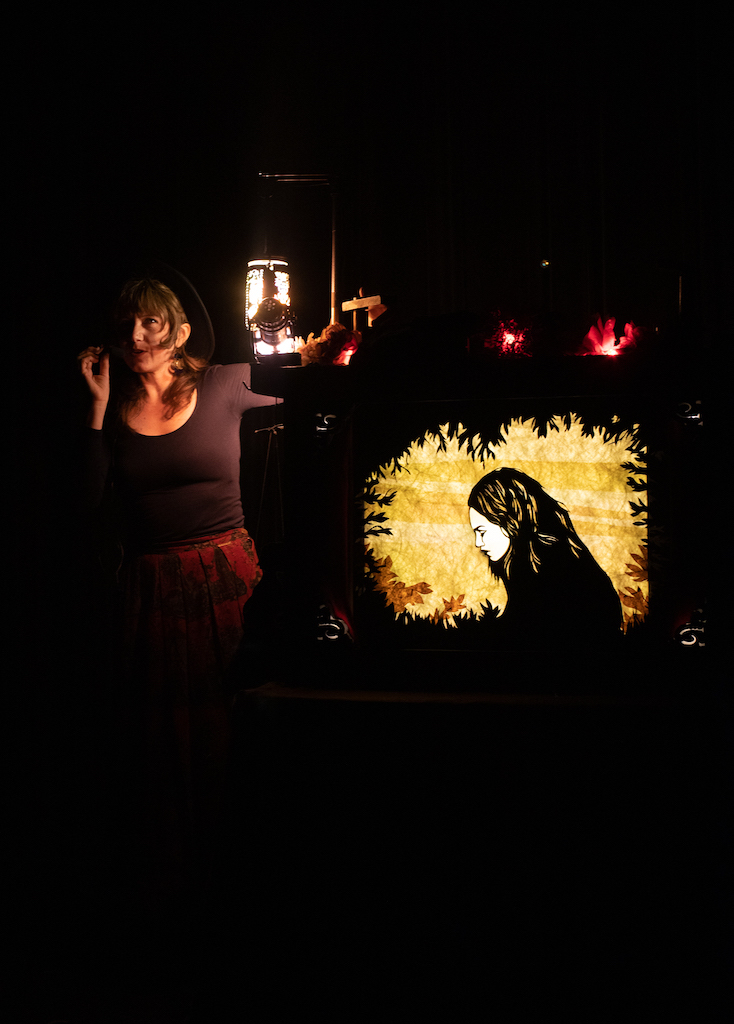 “Or through the eyes of metaphor,” Zeller Bass chimed in. “Our visuals evoke a mood without spelling it out for everybody.”

Since 2013, Sandglass Theater has hosted their own signature crankie festival in Putney, Vermont called “A Rafter of Crankies.” They were inspired by three women that performed at their theater–Katherine Fahey, Anna Roberts Gevalt, and Elizabeth LaPrelle. “I immediately latched onto it,” said Zeller Bass. “Any little box, round or square, I would cut a hole in it. It was so hands-on, beginning to end. It is so tactile.

Movement appeared to be the theme of the 2023 Baltimore Crankie Festival, which takes place every year at the Creative Alliance. Puppets weren’t the only thing moving, as dance was a massive element to the event. Things really got popping during “Crank that Beat,” a collaborative performance between Beat Box Dads (Jamaal “Black Root” Collier and Max Bent) and visual artist Jes Raschella. Without hesitation, they got everyone up and moving.

As Teaching Artists, Bent and Collier perform for elementary school students. They created “Alphabeats,” a video series that explores the percussive nature of phonetic letters, their ASL symbols, and lots of jubilant movement. They shared aspects of that during their performance with a number called “Don’t Forget About YOU” which prompted the audience to use ASL to sign out the five vowels. They transitioned into a moment of mindfulness where everyone took a deep breath. Then Bent knocked out some beats and Collier shared a story of his journey as a musician, getting the audience to chant out the colors of the rainbow.

When he was working on the crankie and performance piece, Bent was looking forward to the dreamlike opportunity to tell a story in a nonlinear way. He shared that they would blend stories together with songs and compared it to his own musical process. “It’s almost like sampling,” he said. Raschella was particularly excited about pairing her visuals with body movement. Not only a prolific caricature artist, she is also a circus artist trained in stilt-walking and hula-hooping.

My personal highlight from this year’s Baltimore Crankie Festival was a surprise performance by Ethiopian dancer Melaku Belay, nicknamed the “Walking Earthquake.” Accompanied by a crankie, Belay told the origin story about “Eskista,” a traditional Ethiopian cultural dance. “Eskista” means dancing shoulders and much to the audience’s delight, Belay enthusiastically demonstrated the dance. Later on, as the house band Geraldine played, one of their members, Jocelyn Haversat, started clogging on the other side of the stage. Belay joined her on stage, showcasing a wonderful pairing of two unique dance styles. Then his friends joined him on stage, where the group exploded in the collective joy of the Eskista dance.

Every year, the Baltimore Crankie Festival sells out weeks in advance. “I’m sorry-not sorry it sold out early,” Josh Kohn said with a sense of satisfaction. As the former Performance Director of the Creative Alliance, Kohn has been involved with the Crankie Festival for years. Anna Roberts Gevalt and Elizabeth Laprelle organized the first festival in 2014. Kohn took over when they moved away from Baltimore and has been co-organizing the festival with performance artist Emily Schubert.

While talking about curating this year’s festival, Kohn emphasized the importance of balance. “Emily is deeply entrenched in the puppet community. Every year, I look for new artists who haven’t made a crankie before, to add some spice.” With these extra bells and whistles, Kohn likens the festival to an old time variety show.

“One of the things I love about the festival is the community of people,” Fahey shared. “It’s so fun to get together, to geek out on what we made. Every year I message Anna,” said Fahey. “She was really the force to start the crankie festival.”

Thinking back to the first festival, Fahey remembered that it was a fun challenge putting together the bill. Now the festival is at a point where people ask if they can perform. “It’s always so exciting when a new person makes one. They found a way to tell their story!”