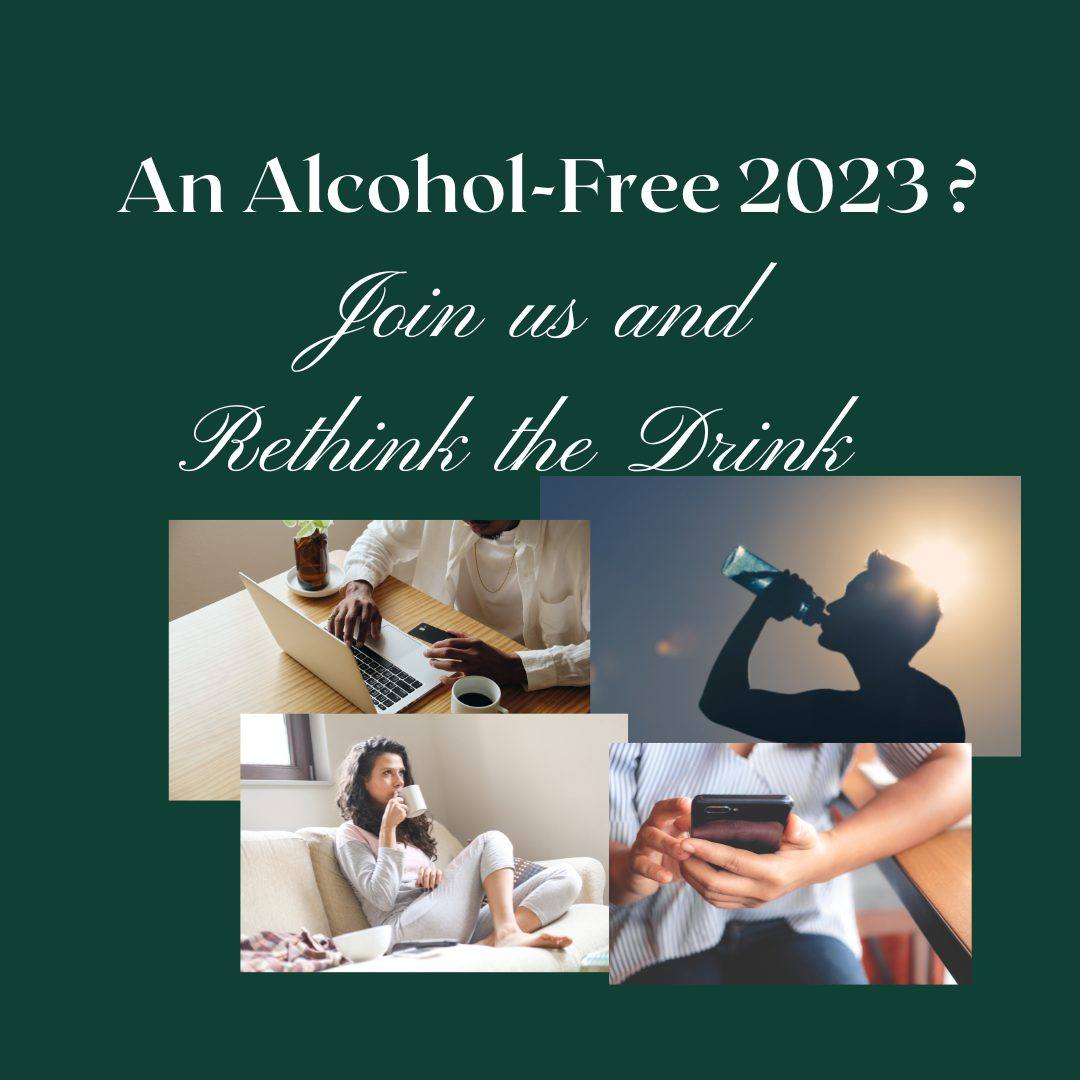 Dry January 2023 took me on an unexpected roller coaster ride of emotions. The emotional upheaval wasn’t from dealing with withdrawal symptoms or feeling socially awkward without a drink in hand. 2023 is the beginning of my 8th alcohol-free year, so not drinking is natural for me now. My Dry January virtual roller coaster ride came from my reaction to the “same old same old” cultural mixed messaging that I thought I had stopped caring about years ago.

Have you noticed the hypocrisy?

Shortly after I stopped drinking in 2015, the New York Times and Washington Post both published reports of studies that found women my age were dying in unprecedented numbers due to alcohol-related causes. I noticed that messaging celebrating the health benefits of moderate drinking and the necessity of “mommy’s wine time” was everywhere and no one seemed to care about the cause-effect relation! I did some earnest fuming and ranting about manipulative alcohol marketing, and as the years passed and the statistics got worse I would put my rant hat back on and say CAN’T YOU SEE WHAT’s HAPPENING HERE ?!

I learned that the important thing was that I could FINALLY see what Daily drinking had done to me.

Did you know that alcohol is killing people in record numbers? Maybe you think that the problem is not the alcohol but the people who can’t drink it responsibly. Alcohol-related deaths in the United States doubled from the turn of the century to 2020, and then those deaths increased again by 25%, and then increased again. The statistics are easily found online here – here – here – here and everywhere really. Interestingly this situation is often called a silent epidemic but why is that so?

How can we be so unaffected by these dramatic statistics?

Why don’t we acknowledge and do something about this devastating crisis of avoidable and premature deaths?

I think that the problem is people feel that they need to drink and are so embarrassed if they develop a “problem ” with drinking that no one wants to address the elephant in the room. If we feel like we’re losing control of how much we drink we hide the evidence out of shame. Trying to wrap around the deadly seriousness of alcohol addiction in the mainstream is all but impossible because of messaging like this tone-death ad from Martha Stewart that I stumbled over on Day 4 of Dry January tagged #dryjanuary on Twitter.

Tone death because it makes alcohol dependence cute and funny. Tone death to those of us supporting people who are genuinely trying to go dry this January. But spot on it would seem to everyone else. Or at least all the people on social media who kept commenting enthusiastically on what a fantastic message this was from Martha. Buzz Feed Can’t Stop Laughing and CNN thought the cheeky ad was brilliant too. After the hangover cures for January 1st are old news, making a joke out of Dry January is just about the most popular thing you can do in the first week of the new year.

“Experts on alcohol abuse have found one demographic group that’s drinking at an alarming rate. Not teenagers. Not college-age people. It’s baby boomers… The increase in drinking among older Americans is most pronounced among people with greater levels of education and income, and among women”

This is not the first time since I’ve stopped drinking that I’ve seen staying sober mocked and alcohol-dependent behavior humorized in glossy, sophisticated ad campaigns, so why did all of this make me so angry, frustrated, insulted, discouraged, and enraged at the beginning of Dry January 2023? No one ever said that marketing campaigns had to be ethical. Quite the opposite right? But in a society that is so driven by booze, it is really difficult for people to try to not imbibe for any amount of time, and Dry January should be an island of calm in a sea of cultural mixed messaging.

If you’ve ever sincerely tried to stop drinking, you know that the first 2 weeks of quitting are the hardest. Even for people who might be considered to be “gray area drinkers” or “high functioning” and “not alcohol dependent” the first 5 to 7 or 10 days alcohol-free can feel like walking in roller skates on a tightrope over a shark pool. The timing of that commercial, in the first week of Dry January, the only time of year that people can actually catch a wave of cultural encouragement to “try alcohol-free”, made it extra difficult for anyone who saw it.

I also found it appalling that Tito’s was actually selling, and quickly sold out of, a “DIY January Kit” with the attachments from the commercial, and donating the profits to a “non-profit of choice”. None of their chosen non-profits are supporting people with health or drinking problems.

What is Dry January all About Anyway? It’s not about going sober. It’s just about taking a break

Dry January began for a simple reason: in the UK, one person dies every hour because of alcohol according to Alcohol Change UK. Their mandate is not to eliminate alcohol, but rather to change the way people drink, and move drinking to be more of a conscious choice, instead of what they call “a default”.

I never made a Dry January pledge that I can remember, but 8 years ago I signed up for my first one-year alcohol-free challenge on a website called Hello Sunday Morning. When I signed up to stay accountable for that first year alcohol-free by writing to a community in a blog-style format, I expected living sober to feel like a dire sort of punishment, specifically because of a lifetime of absorbing cultural messages like the one in that Martha Stweart ad. But living alcohol-free these past 8 years has turned out to be an unexpected celebration. A celebration of freedom and a celebration of life.

There is a trap created by that mixed messaging that I could only see clearly after I stopped drinking. A trap that I had not seen when I stepped into it in my mid-20s or when the door slammed shut in my late-30s. I wanted desperately to be able to destroy that trap so that others would not get caught in it. But I learned that my time was better spent sharing stories that helped unravel the threads of shame and self-doubt that held people there. My time was better spent creating a safe and vibrant community where people could share the keys to the lock on the door.

It seems that whenever an article about the continued rise in deaths related to alcohol consumption like this one, pops up in my social media feed, it’s followed by something like this that celebrates the cultural message that alcohol is essential to a life well lived. But I realized that the marketing Goliath was not going to be felled with a few well-aimed stones and there were other people out there who were more skilled with a slingshot than I.

It took me a few years to get to a place where I was able to turn my back on the negative and focus my energy on the positive but getting there has been so rewarding. I love helping people who are trying to stop drinking connect with each other. It’s a joy to watch them find and share unexpected solutions that work. I love to watch people’s lives open and fill with color as they live alcohol-free long-term and find their voices and their authentic selves. And I love to experience the blossoming of my own life as I continue to steer clear of the booze that I used to love so much and to share my story and the stories of others who are experiencing the same thing. All of these things bring me so much joy that I stopped getting riled up and stopped ranting about toxic marketing and media messages years ago. I’d rather focus on doing productive work as vibrantly as possible than focus on trying to change a culture that allows companies to profit from glamourizing a product that’s killing people in record numbers.

IDENTIFY THE TRAP, SHARE THE KEYS, THEN CELEBRATE TOGETHER LIVING LIFE FREE.

The thing about roller coasters is that they go up and down. That is exactly what Dry January 2023 has been to me. It started with an unexpected dip early on and then the car started to head up the tracks again in the second and third week as more and more articles popped up about great new alcohol-free drink alternatives and bars glamourizing sober! Then in the third week, the articles from Canada started turning up. Not just one article from a Canadian paper but article after article from The Guardian to Time Magazine talking about Canada taking the reports that no amount of alcohol is safe to drink seriously and setting new guidelines that more clearly reflect the true health risks of habitual drinking.

Why not try dry in 2023? WHAT WOULD A YEAR ALCOHOL-FREE MEAN TO YOU?

I started this Boozemusings blog back in 2016 when I was 1 year sober, to help people find the unique solution that I had found while searching online a year before. One year later when the online community that was my accountability buddy was shut down I started the Boom Rethink the Drink Community to keep the celebration going. When people first join our private community they are asked how they found us – recently I read an answer that made me smile wide!

It started with Dry January and my internet research on sobriety – somewhere there I found the link. I wanted to try to cut down on drinking and here I am, over a year later AF and happy 🙏🏻 ❤️

Join us alcohol-free in 2023 – BOOM Rethink the Drink Community

Here are some thoughts from our members on what it feels like to be one-year alcohol-Free and how they got there. ( just open those blue links to read their stories)

I let life happen around me, but this time, without a glass in my hand. I found there is joy and laughter that doesn’t need the spark of alcohol to ignite it. I confided in my family and closest friends that I kicked the can, and the love they poured over me strengthened my resolution.

Bursting the Bubble: One Year of Freedom from Alcohol

It is a good life, this life without alcohol. It is nothing like I imagined it would be. It’s better. It’s fuller. It’s brighter. It certainly isn’t perfect, but I love it anyway.

I used to think about alcohol all the time. My first several months, every hour of every day, I thought about alcohol. A year later, I don’t think about it very much anymore. I have ‘re-wired’ my life in such a way, and built an example to those around me (family and work) that I am well known now as a ‘non-drinker.’

Life alcohol-free is so much better! Without a doubt, it has been the most life-changing, life-affirming, life-enhancing decision I have ever made. This is how it ‘worked’ for me.

I am not like everyone else, and neither are you. I became even more human this past year, recognized I need kindness like everyone else, and so will you if you decide to stop drinking and start feeling. It’s a small list, my one-year sober list, and strangely abstract. It’s the truth, it’s what I’ve learned to do, and I’m going to share it with you now.

Open Your Mind to the Possibilities