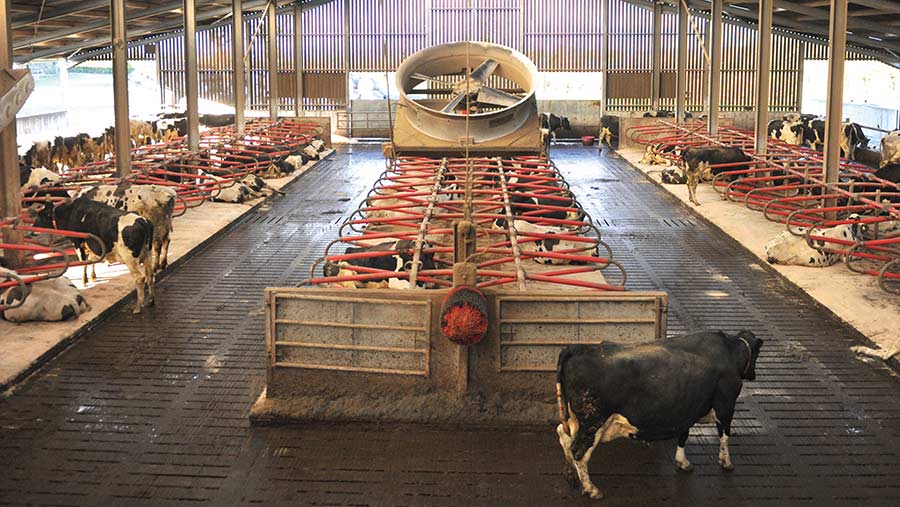 A Pembrokeshire family farm has made a once-in-a-generation investment in a £1m dairy building designed for cow comfort and ease of management.

They came to a crossroads when their milking parlour, cubicle housing and slurry store simultaneously needed an upgrade.

“Everything needed replacing – the parlour was coming to the end of its life, the cubicles were not good enough for the type of cow we had bred and we didn’t have enough slurry capacity,” Mr Davies recalls.

It left the couple with a simple choice – to sell their pedigree ‘Tynewydd’ Holstein Friesian herd or to start afresh.

“We were at the right age to reinvest,” says Mrs Davies, who turned 30 when work started on the new development.

“We were old enough to understand the financial implications of what we were doing, but not too old that we wouldn’t see a return on that investment.’’

With a completely blank canvas to work from, the Davies opted to change the system to one that is fully housed, with underground slurry storage and milking robots to minimise labour input.

How did you go about designing the building?

When you are investing £1m, you need to get the design right first time, so we visited lots of other farms across the UK that had changed their infrastructure.

Labour availability in dairy farming was just starting to become an issue at that time – we were struggling to get people to milk for us – and when we saw robots integrated into some of the sheds, the penny dropped.

We took on board a lot of advice – for instance, siting the robots in the middle of the shed instead of the corners, so that the cows would be happy to use them.

It was a massive investment, and although everything worked on paper, we didn’t know whether it would in practice and if the cows would take to the new system, but it has all turned out well.

I don’t think we would change a thing, except increase the automation. With that in mind, we are going to invest in a “feed kitchen” this spring – it will load and mix the total mixed ration.

We have calculated that with the savings on labour and diesel it will pay for itself within five years.

Tell us about the build specifications

We were milking 120 cows, but we built the shed with expansion in mind and now have 250 cows in the herd.

The shed is built in two halves – each mirrors the other, with 120 cubicles and two robots in each half.

As it is a robot system, we don’t need a collecting yard, so there is a big space saving compared with what you need for a conventional parlour.

We installed Yorkshire boarding at both gable ends and, because it is north-facing and on an exposed site, there are gale-breakers down one side and an automatic folding ventilation curtain down the entire length of the other.

The curtain is programmed to shelter the cows when the wind, rainfall and temperature hit certain points.

There is a large calving area with access to one of the robots and we have a separate handling facility.

Keith Owen organised the planning side of things, the groundwork was done by Russell Thomas, John Morris supplied the frame and the fibre cement roof, and Richard Bleddyn did the concrete work.

What are the main features?

There are four milking robots and every cow has access to two – a left-hand and a right-hand system.

There are robots for pushing up the silage and for scraping, and these are programmed to operate every hour.

With a fully housed system, we wanted to make sure that the cubicle places were as comfortable as possible, so we went for flexible cubicles made of plastic and rubber.

The shed needed to be good for cow flow, so the passageways are wide and none of the ends are blocked off – the cows can walk freely around the building.

There is underground storage for 1.5m gallons of slurry, which covers us for five or six months.

We were going to put additional slurry storage by the side of the shed, but underground storage, although an extra cost, doesn’t take up extra space and it keeps the rainwater out.

Cows have access to drinking water from quick-empty water troughs that are easy to clean out.

What is your favourite feature?

The general automation – it helps the shed to function for the cows and reduce our workload. It means that we can concentrate on the management side of things.

The future for dairying is positive and automation very much plays into that.

What couldn’t you live without?

The view! When we are in the shed, we are looking straight out to the Preseli Hills.

Has any aspect of design/tech helped ease management or improve animal performance?

We had an issue with heat stress, so we retrofitted six 1.83m fans over the cubicle beds and a 1.4m model over the calving area, all automatically controlled and with variable speed.

These were fitted 2.1-2.4m above the cubicle beds, so that air would blow over the cows when they are lying down.

We no longer see the health and production problems we had been getting.

Each fan cost £2,000 and, as they required three-phase electricity, the installation cost was £7,500.