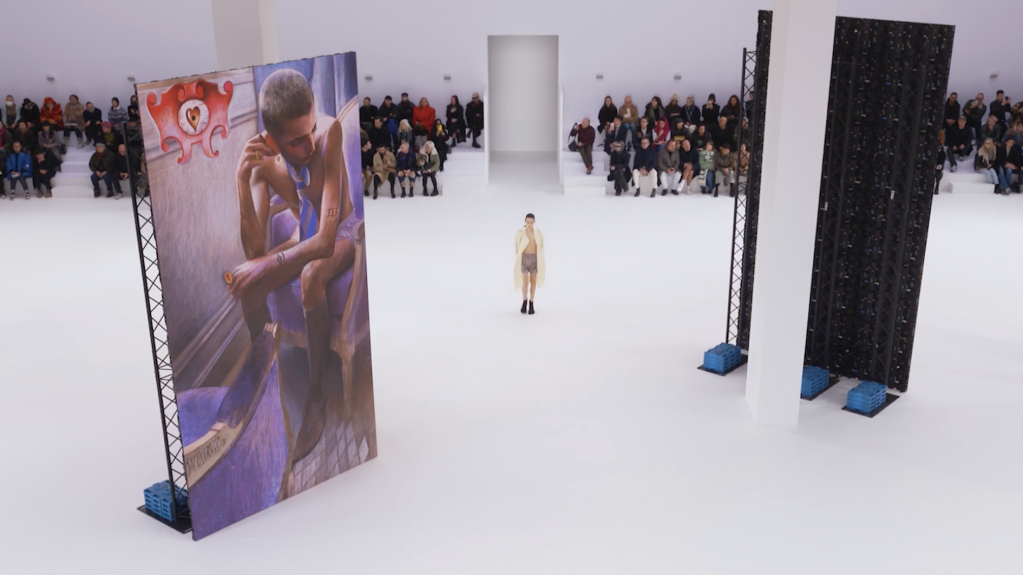 Every fashion week brings top designers into dialogue with the biggest and budding names in visual art. The latest such collaboration came courtesy of Loewe, an industry darling for its radical yet wearable wardrobe.

Loewe partnered with artist Julien Nguyen for its Fall/Winter 2023 Paris Fashion Week show this month. The Washington, D.C.–born, Los Angeles-based artist makes a lot of off-kilter paintings where art history and speculative fiction collide with his personal life. The results are often saturated and surreal, but contain the internal logic of any urgent dream.

Two of his paintings, Executive Function and Executive Solutions, both from 2017, were included in that year’s Whitney Biennial. They were populated with skeletons, angelic allusions, and nudes, all hearkening to Renaissance masters like Sandro Botticelli. But rather than seeming staid or stale, these elements were shown framed, in arrangements that recalled the front page of the New York Times.

For Loewe, Nguyen created three artworks: a miniature watercolor on vellum of his muse Nikos decorated with pithy messages and symbols that allude to private feelings, as well as two digital artworks that feature Nikos in a hotel in Paris.

“I think one of the things I’ve been interested in is how one’s life fits into one’s work,” Nguyen said during a recorded conversation with Loewe’s artistic director, Jonathan Anderson. “I think by working with such a familiar subject I can pull out something more strange than I would be able to if I was thinking more historically, or topically or conceptually.”

The miniature was done in the style of the Elizabethan portraitist Nicholas Hilliard, for whom both Nguyen and Anderson share an admiration — or “obsession,” as both the artist and the designer said. A popular court artist, Hilliard created some of the most delicate, detailed miniatures of his time.

Nguyen’s miniature was featured on the invitation to the show. In it, Nikos is painted against a brilliant blue background, a nod to the famous hue Hilliard used in his portraits.

“What is so lovely about the historical techniques that I find myself drawn to,” Nguyen said, “are these things that people have troubleshooted over centuries; through constant experimentation you arrive at incongruous combinations of materials and ways of doing things.

“Tradition is exciting to me,” he added, “not tradition for its own sake but as like a fossil record of people trying to figure out something.”